Warning: count(): Parameter must be an array or an object that implements Countable in /home/customer/www/moholyground.com/public_html/wp-content/themes/wpex-luxmag/functions/meta/init.php on line 755
 Rising Dragon: Contemporary Chinese Photography | Moholy Ground (MOH) 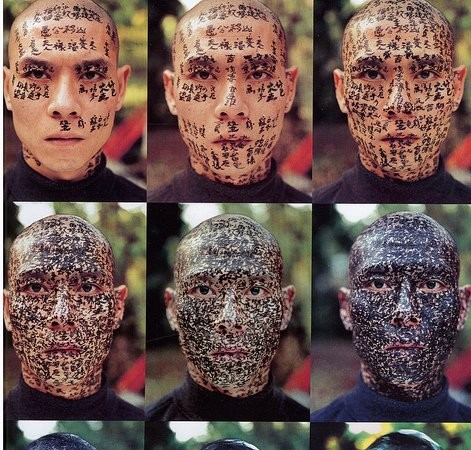 At: San Jose Museum of Art

The Year of the Dragon came to a close in mid-February, not to return again until 2024. As the most revered symbol in the Chinese zodiac, it is quite fitting that the 36 artists exhibited inRising Dragon: Contemporary Chinese Photography are associated with attributions including dynamism and opportunity. Spanning two full galleries on the museum’s second floor, the more than 100 photographs take up a wide spectrum of social, political, and artistic matters that are shaping a nation in flux.

The exhibition opens with a description of the curatorial premise, which is that the years between 2000 and 2012 were exceptionally fruitful for the production of contemporary photography in China. A map adjacent to the wall text situates the cities where the represented artists live and work, and demonstrates the enormous task undertaken to assemble pieces from throughout the country.

To the left of this introductory panel is the work of Huang Yun. Spring, from the Four Seasonsseries, features the artist’s face after it had been painted to resemble a landscape scroll painting. On a reasonably flat surface such as paper or canvas, the vegetal and rock formations are pleasing components of a traditional Chinese art . On the photographer’s face, however, the classic image obscures identity.

Likewise, photographer and performance artist Zhang Huan considers the impact of tradition on a younger generation. For Family Tree, Huan asked three calligraphic artists to transcribe stories, family names, and memories as the artist recited them. The nine photographs — records of a one-day performance in Amherst, Massachusetts –- document the gradual disappearance of Huan’s face beneath layers of black ink and, one could argue, more than one thousand years of artistic and social convention.

Through similar however unique means, Yun and Huan’s works raise questions about the role and potential burden of history as China forges through a period of unprecedented growth.

Tradition and history are the primary threads that shape the visual tapestry of Rising Dragon, but they are not the sole concerns of the participating artists. Also scrutinized are the impact of nearly unchecked commercial exchange upon Chinese society, the role and value of mass media including photography, and the effect of rapid industrial growth upon the environment. By not limiting themselves to what is familiar or safe, these photographers effectively advance dialogue about matters that reach far beyond the (often insular) concerns of contemporary art. Far-reaching cultural effects of the push and pull between industry, identity, and history are examined in the works comprising this very contemporary exhibition.

Case in point: a still shot from Cao Fei’s video Dog Days. Fei’s male and female actors are made up to resemble dogs and in the course of the video, behave as canines do – fighting, flirting, defecating, sleeping – all within an office setting. Her primary commentary challengesgroup think, a daring reference to Communism at a time when free speech is heavily circumscribed. A secondary note also suggests the loss of individuality in favor of brand identity, where the individual becomes subject, like a domesticated animal, to a master’s whim.

Also confronting authority, in this case the predominance of photography as a source of “truth,” is the work of Xu Chen and the artist collective Liyu + Liubo. In My Club, Chen stages the assault of world leaders, including former President George W. Bush and UN Secretary Kofi Annan, by bands of boys. The heads of his victims are overlaid on to bodies of other participants. This technical device draws the viewer’s attention to the photographer’s intervention within the process, and questions the often lauded and equally disputed veracity of the medium itself. Liyu + Liubo stage scenes that appropriate and reinterpret outrageous tabloid headlines such as An Escapee Being Chased Dropped Through the Floor. The literal and visual interpretation of headlines makes for both hilarious compositions and much needed critical examination of state-run media.

Liyu + Liubo, “Chutian Golden Paper 2007-08-13, An Escapee Being Chased Dropped through the Top Floor of a Building and
Scared Everyone Inside,” from “The Victim” series. Digital chromogenic print 16 x 20 inches. Courtesy of the artists

Hyperbolic language aside, it is safe to say that this exhibition both entertains and educates. From Lin Ren’s political piece, Sleepwalker – Great Hall of the People, a photo where sheep are inserted into Tiananmen Square, to Weng Fen’s contemplative consideration of changes in the urban landscape in his Haikou, the juxtaposition of subjects throughout the installation both seduce and critically engage the viewer.

Two outstanding images reinforced the idea of a tenuous balance between tradition and contemporaneity. Wang Wusheng’s Mt. Huangshan is a lush interpretation of a mountainous landscape made famous in paintings and works on paper. Without the sharp focus typically associated with photography, these large format pieces recall Pictorialist compositions, and stir sweet melancholia. Wisely hung adjacent to Sun Ji’s Memory City #1, a contemporary landscape featuring composite views of abandoned or destroyed factories in Shanghai, the pair of images attest to the sway tradition continues to hold in Chinese society, and the unstoppable momentum of modernization.

Rising Dragon will pleasantly surprise the discerning patron who may have been put off by the exhibition title. The western association of Chinese culture with the dragon borders on the stereotypical. Additionally, the narrow window of 12 years used to define the scope of production falls well short of describing how long Chinese artists have been present on the international stage. On the other hand, accessibility is a valuable draw for a broad-ranging audience and, in a sense, the fact that all the works shown are quite current acutely reflects the artistic and cultural concerns of China today.

The technical accomplishment and stylistic diversity of the artists represented illustrates the dynamic concerns of major players in the China art scene. Like the mythical creature referenced in the show’s title, the show’s images and makers are vested with creative powers that will propel China’s already booming art scene into a force in defining contemporary art in general. Kudos to curator Miles Barthes and the Katonah Museum of Art for assembling a fantastic exhibition, and to the San Jose Museum of Art for hosting the only west coast installation of the exhibition.