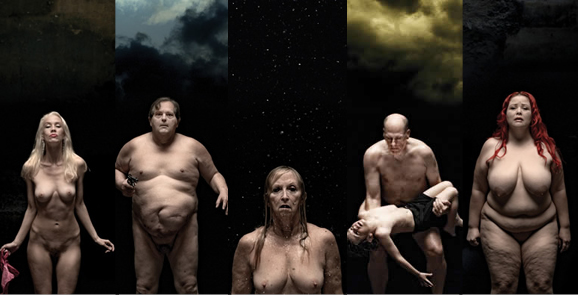 This first person text by the artist examines gravity’s effect on human emotion, told through five high definition video sequences filmed at 2,000 frames per second. GRAVITY debuted in Los Angeles at Young Projects this past February as a video installation. MOH presents GRAVITY’s most dramatic moments in still images alongside Mr. Haussman’s exegesis and a video taken at the original exhibit.

Each of the five subjects is filmed in slow motion, floating upward then descending down to the earth, where they bottom out in gravity’s clutch. Yet each person is magically stationary. They do not move an inch. All that moves is their skin, cellulite, muscles, bones, and expression, creating a disturbing yet beautiful shift in body mass and emotion. Even the background stays perplexingly still. The total effect is that of a moving painting.

This slow motion study reveals the shocking effects of gravity upon our body. What is normally missed in the blink of an eye, is poetically recorded in extreme slow motion, as gravity takes hold and pulls the body down to earth, causing the skin, cellulite, muscles and facial expression to sag down, with a weariness, as if the subject has suddenly aged thirty years. It appears like a special effect, the force ripples from the legs up, turning the body wrinkled and saggy, with a worn, older face that is defeated and depressed. Then the exact opposite effect and emotion overcomes the subject as they are made weightless and set free. We observe the body becoming youthful, rejoicing in it’s expression and flawless skin texture, as it soars away from the earth. All physical and emotional expressions seem to float effortlessly upward in a positive, beautiful direction.

The lighting and color palette is created by a strong heavenly top light, used by Renaissance masters, which dramatically exposes the flesh as if it were moving brush strokes and reemphasizes the relation with the heavens, gravity and sheer weight of the world.

This emotional shift from optimistic youth to depressed old age provokes a very strong, emotional effect. Therefore, each person interacts with a simple, yet symbolic prop in order to gain more depth into this radical emotional shift.

A large naked man points a pistol at the screen. He stands below brooding clouds. The pistol is an iconic image we have seen before – from movies, magazines, to the Wild West – but never in this context. To suddenly take the clothes off this man and expose his emotions, as he bottoms out and goes from dark, brooding, old man, darting his eyes, paranoid, searching for someone to shoot; to his highest apex where he is a happy, confident younger man, with a child like expression, creates a psychotic shift in emotion. As the man unpredictably shifts from angry to happy, desperate to carefree, just like the clouds above him, going from black and stormy to patches of blue sky, the feeling provoked is one of constant unease. The interesting point is that he always points the gun at us on his way up, escaping gravity.

A young blonde woman clutches her red bra and panties. Traces of a worn, textured European wall are exposed above her. The use of the color red as underwear seems to be judgmental of her character, along with her smeared lipstick and mascara.She is obviously not coming from a good place, however when she soars up, her body is flawless, attractive and she exudes a confident beauty, making her red underwear sexually promiscuous and enticing. Her beautiful blonde hair floats up, exposing sparkling earrings. She raises her chin, challenging the viewer. Yet when she bottoms out, all her blonde hair wraps around her face and she suddenly ages forty years, making her a ‘Sunset Boulevard’ tragedy. Her thin body now looks ravaged by time. Her expression becomes disfigured. Those red underwear now tell a sadder story, of life silently passing the beauty who has lived the same day over again, relying on her youth and looks, which has clearly now faded, due to it’s lifelong battle with gravity – the symbolic shift from sexy lingerie to sad relic.

A father cradles his wounded son in his arms. Brooding clouds at sunset, tell of a warm day approaching darkness.The father’s face mid flight expresses fear, shock, and complete uncertainty of his next move. As he reaches the bottom the struggle to hold his son, as gravity tries to steal him away, becomes paramount. His son cries out in pain, helpless, as if it were his last breath. The father readjusts and struggles, with what is now a bag of heavy mass and bones. The boy soon becomes weightless in his arms and the father looks to the camera for help. It is a moment of true crisis, which immediately reminds one of the fragility of life, and that fate plays no favorites. The call of gravity upon all bodies is created equal with the same destination.

A voluptuous woman, with pristine white skin and red hair floats upward against a cold, dark, chunky wall. Her red hair swirls like beautiful ink in water. Her skin texture is flawless and rounded, like a ‘Botero’ sculpture. Her eyes stare out almost lifeless, like a baby doll. Once gravity calls her back to earth, the red ink swirls now fall like blood onto her shoulders and neck. The once flawless skin and body is riddled with wrinkles and cellulite texture. Her weightless body now feels too heavy to hold, a burden. And the face that once looked like a young pristine baby doll becomes that of a seventy year old struggling with a life of weight and battle with gravity. The red hair seems to take the viewer’s eye from magical and pristine to heavy and forlorn.

Lastly and maybe most shocking is the only close-up of the show. An older woman’s face is filmed in close-up as rain provides the most magical result of the effect in the entire ensemble. This woman seems optimistic and fine with age and the rain. She almost seems to be living out a great memory. Her face seems to laugh with joy. She has a child-like expression. Then as she bottoms out, the rain pours down her face. The viewer observes in close-up, heavy streams rolling down her face at the same time her expression is dropping, making it seem as if her face were dripping away. The rain runs with the contours of her wrinkles, cascading down her sagging jaw, down the loose-skinned neck, drooping eyes, in such a dramatic fashion, one is immediately reminded of some special effect in a horror film or early ‘Indian Jones’, where the person’s face literally melts away. Just as the viewer thinks it is as grotesque as it can get, it becomes more extreme. This would have to be the purest example of gravity’s final act, and it is appropriately positioned in the center, two portraits on each side…. as the fifth.

To the normal viewer, a person jumping on a trampoline is just a figure moving up and down and their expression is a blur of motion.To capture this action and emotion, all the subjects were shot at 2000 frames per second, while performing one simple action. Afterward, the body is completely steadied in a postproduction process known as ‘tracking’.  This process takes the subject and steadies them in the frame, so they are no longer moving up and down. All that moves up and down is the skin, cellulite, muscles, and weight of the body, caused by jumping on the trampoline. Therefore the overall effect is a subject completely still in the frame, yet their skin, fat, and expression changes and moves dramatically upward in slow motion, as they defy gravity, and then sags downward, and ages as they are pulled back down. It is beautiful, magical, yet disturbing.

Each of the five screens is 72 inches and viewed in a vertical position, mounted on the wall. The monitors are spaced three feet apart from each other. The music is aslow haunting, yet beautiful choral mix that summons the heavens and earth. It represents all the portraits both lyrically and emotionally, playing to the motion and emotion of each of the five subjects. Each piece is exactly the same length and begins and ends in sync with each other.
Each monitor, however, will be playing one specific section of the music mix, so that although one is hearing the mix of all the monitors, we are able to distinguish a difference in the instrumentation of each monitor. In essence all five monitors are creating the single piece of music we hear in the exhibit space.

Michael Haussman was born in the USA in 1964 and lives and works in Rome. He is a director, writer and artist, whose internationally acclaimed commercials have won numerous awards and are featured in advertising books and trade journals. They include campaigns for Levi’s, Diesel, Bulgari, Absolut, BMW, Yves Saint Laurent, Guinness, Adidas, Ray-Ban, Volkswagen, Coca-Cola, Budweiser, Replay, Nespresso and more.

Michael is currently attached to direct Man Of Power, the story of Nikola Tesla, which he co-wrote and is being produced by Johnny Depp’s production company, Infinitum Nihl. He has also just finished writing Good Guys, which Michael will direct in Rome, Italy, centering on two Americans meeting in a hotel bar. After one is found dead, the other takes over his identity, becoming everything in life he fought against.

GRAVITY was chosen by LA Weekly as one of “10 Great Artworks at Art Platform Los Angeles Art Fair 2012” — “This dispatch from the ugly/sexy aesthetic wing of modern art comes courtesy of video-centric Young Projects Gallery, which presented a series of large-scale video pieces distributed throughout the fair. Considering his career as a commercial, video, and fashion editorial director, it is perhaps not surprising that Haussman would utilize both cutting-edge software and his up-close look at bodyimage obsession to create this super-creepy video work that transforms footage of a model jumping on a trampoline into an unsettling meditation on the effects of gravity {and by extension, the ravages of aging } on the female body.” — LA Weekly, 12 October 2012

THANKS TO PAUL YOUNG AND YOUNG PROJECTS FOR CONTRIBUTING THIS FEATURE TO MOH ONLINE.