Warning: count(): Parameter must be an array or an object that implements Countable in /home/customer/www/moholyground.com/public_html/wp-content/themes/wpex-luxmag/functions/meta/init.php on line 755
 Humanizing Process: Interview with Ed Drew | Moholy Ground (MOH)

Ed Drew is a sculptor, photographer, and serves in California Air National Guard. He recently returned from a military combat deployment to the Helmand Province in Afghanistan. There, he united his military and artistic identity by creating the first series of tintype photography made in a combat zone since the Civil War. This body of work has redefined Ed Drew’s artistic and life approach.

| Courtesy of The Robert Koch Gallery

John McCoy: How long have you been working with tintypes?

Ed Drew: Not very long, I had known about them for almost a decade, but I didn’t commit myself to actually making my own until a year ago. At that point it was in preparation for my deployment to Afghanistan, so it was a matter of getting good in a relatively short amount of time.

JB: So, you wanted to get good fast with the idea of taking tintypes in a combat zone?

Ed: Well, I wanted to out of necessity, because I had not previously had any desire to make tintypes. Since the process is important to me as part of the piece and I use it to translate metaphors, up until that point I didn’t see a necessity for tintypes in my work.

Americans in war are still people and I wanted to reclaim their humanity.

Merely making tintypes of people, for me, wasn’t enough. I really had to have a cause to use it in a proper application. For instance, my first military job I was as a mechanic, and I had to use the proper tool for the job I was doing. I wasn’t trying to be creative or different in using tintypes, but that happened as a result of my using the process.

JM: Did anything inspire you to pursue taking tintypes in Afghanistan?

Ed: I can definitely say that there was a desire to use the process to “describe” a particular aspect of the person, something that only tintypes can produce. I also felt tintypes were very revealing of both the sitter and, interestingly, the photographer. So in making them, they told the story of me as well—the photographer’s story in the way I worked the photo and the physicality implicit in the creation of the image.

It’s important to understand I am a conceptual artist and the process—and indeed the creation of art—is the essence of my work. Through process, I convey the metaphors necessary to understand my meanings. So you see, it had to be tintypes not for aesthetic purposes, but mostly for their fundamental nature of being a singular, almost sculptural artwork. And then the conceptual meanings they produce that help us appreciate the actual person in the picture.

JM: As a conceptual artist, do you see your work in a cultural, historical, or political context?

Ed: I see my work as cultural with a specific context that can be broadly applied across other cultures; the context being that Americans in war are still people and I wanted to reclaim their humanity. I think military members are perceived to lose their humanity when they enter the “war machine” and put on the uniform—by definition, a uniformed service member is supposed to do this.

Then there is also a certain timelessness to the photos—one of the reasons I use the process—that makes them look like they could be from the past. I feel like this can talk to people from any age by recalling that people in war always look the same. It plays on the idea that war has existed since human beings came into existence. The battles change throughout time, but the faces remain the same. The timelessness directly speaks to the historical context and conjures ideas of the Civil War—and even more recent wars—in their faces. I definitely make no political statement with my photos, and I am very explicit in saying that there was absolutely no motivation to promote war or dismiss it. The only allusion to war I make is our collective human connection to it throughout the history of mankind.

JM: I’m a Veteran. (Army Infantry- 11 Bravo)  I was deployed to North Africa as a peacekeeper in the early 90’s. As an artist and a soldier, I had trouble reconciling the two identities. Did you find it difficult to be both at once, or did you have switch mindsets back and forth?

Ed: I think it’s always a challenge for me to switch back and forth and I feel a lot of a stress when I do. In Afghanistan, I was in more of a documentary mindset and I worked mindlessly, so the work came from a natural space inside. My work there was directly dealing with what I was doing so I just had to coast mentally and let the work create itself.

When I’m at home it’s a different story. The work I do here does not deal with the military in any way, I have to switch thought processes when I go from art to work. Flying on the helicopters and thinking tactically comes from a very different place inside than thinking about a sculpture. The 2 identities don’t match and so it’s the process of switching gears that is most difficult; it usually takes a few days for me to relax and create art freely.

JM: For me, the portraits are the most striking. They exude a seriousness of purpose except for one—the female. How did that portrait come about?

Ed: All portrait poses were chosen by the person and she had a specific rule, which was that she does not do serious poses. I thought it was brilliant and then later historically accurate as tintypes were the first form of photographic art that was available to the common person. Many people chose to act in a humorous manner during the height of the tintype popularity during the mid-1800’s, as more photographers made images for anyone available because the cost was so inexpensive and the exposure time so short.

This portrait also highlights humor, a very important aspect of the military person’s life overseas that is mostly ignored. We use humor as a coping mechanism. It helps us deal with the stresses in combat and is a great distraction when it’s 115 degrees outside and you’ve been at work for 13 hours. You need to be able to laugh.

JM: What tintype are you most happy with?

He had requested a nice photo for his wife and asked if it wouldn’t be a trouble for me and I was more than happy to take his photo. That photo was really in the spirit of the tintype in the Civil War, because many soldiers sent them back to their families—sometimes as the last image they would see of the person alive. There were a lot of layers of art and historical significance and personal significance in that photo.

I also think it’s just a wonderful image with his seriousness, which reflects who he is—a very calm and collected person who shows little emotion, other than a very sincere and profound laugh occasionally. The image really reflects who the person is in this case. From my perspective in making the photo, I have great respect for the man. I think you can see that in the photo. There are so many reasons it’s the most successful piece in my opinion, and I like it the most.

My work is based on the history of the American military member and their involvement in war as part of a brotherhood. While deployed to the Helmand Province in Afghanistan April-June this year, I decided to document my life and the people around me as part of a fine art project. It extended to my own involvement in America’s longest war, and it is meant to be a very isolated personal study on war instead of the typical photo-journalistic approach. I decided to use the antiquated tintype wet plate process, the first time tintypes were made in a combat zone since the American Civil War. Tintypes are a slow and methodical process, which I felt would best highlight the humanity of the people I work with as well as involve me from beginning to end of the creation of the photograph. Through my tintypes in combat I connected to my brothers in arms which helped to translated multiple persons views of a war, besides my own, through process and subject.

Ed Drew was born in Brooklyn, NYC, after graduating high school joined the active duty Air Force for 6 years. His was stationed in Little Rock Arkansas and Tokyo Japan. It was in Japan that Ed Drew developed an interest for fine art and photography. After 4 years stationed in Japan, Ed Drew moved to Germany for 3 years further developing his artist oeuvre.
He then moved back to America after 7 years absence, joined the California Air National Guard and enrolled in San Francisco Art Institute. He currently attends school full time, for a BFA major in Sculpture and minor in Photography, while flying on US Air Force Combat Search and Rescue helicopters as an Aerial Gunner.
He recently returned from a military deployment to the Helmand Province Afghanistan. from April to June 2013. The resulting body of work while there has redefined Ed Drew’s artistic and life approach. 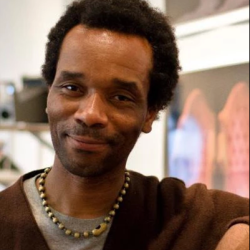 John McCoy
I am an independent publisher, a designer, a writer a day dreamer. I give blood for a good idea and have built my life to be able to pursue the ideas that strike my fancy. I fail often but always take joy in the attempt. Link a charter in a Jim Jarmusch movieI I spiral into random events that end in sublime moments.

I am an independent publisher, a designer, a writer a day dreamer. I give blood for a good idea and have built my life to be able to pursue the ideas that strike my fancy. I fail often but always take joy in the attempt. Link a charter in a Jim Jarmusch movieI I spiral into random events that end in sublime moments.