Warning: count(): Parameter must be an array or an object that implements Countable in /home/customer/www/moholyground.com/public_html/wp-content/themes/wpex-luxmag/functions/meta/init.php on line 755
 Unnikrishnan Raveendranathan: Blood Money | Moholy Ground (MOH) 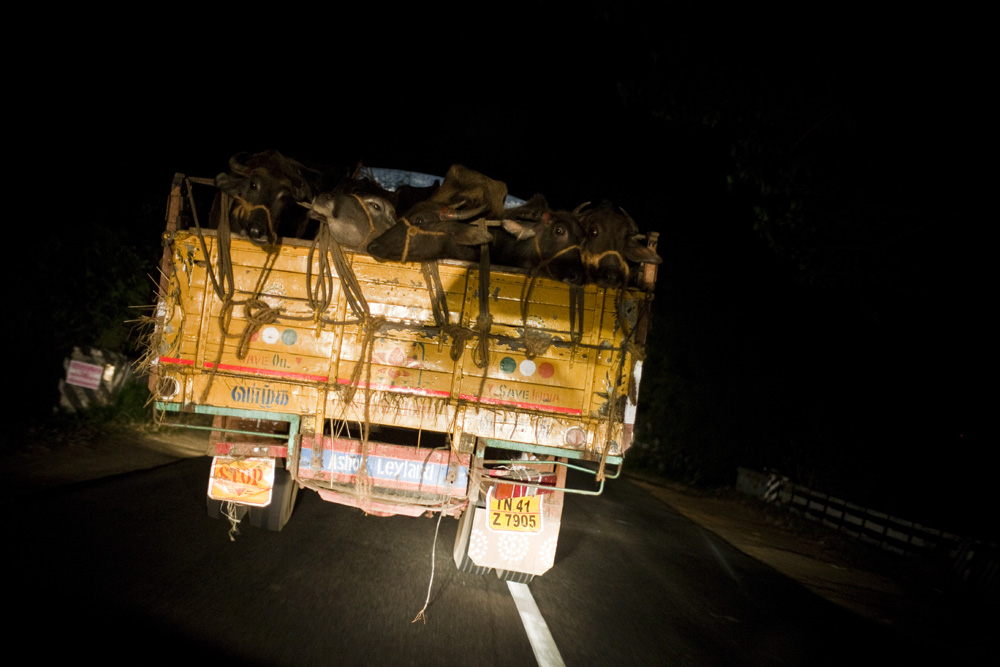 The headlights of my car shined in what seemed like a thousand twinkling, fearful eyes. I squinted to see clearer beyond my windshield, which was covered with rain droplets. The eyes belonged to buffaloes lined up in a massive brown truck as though they were cigarettes in a pack. Tied up to the railings, it was as if they knew what was about to happen to them. In that instant, I knew what my next project would be about.

In a Hindu-dominated society where the killing of holy animals like cows and buffaloes is considered to be the epitome of disrespecting all things Godly, there I was walking right into the middle of the unthinkable. I was focused on what a gripping yet uncomfortable experience I was going to encounter. Mistaken for an animal rights activist, I was refused access by many shop owners to their slaughterhouses. After some research and networking, I came across four ordinary townspeople who took up butchering as a part-time job during the weekends to make some extra cash. It required some serious convincing, but I ended up photographing some of the most disturbing moments I’ve ever witnessed.

It was pitch black, three in the morning, and I was 30 miles away from my hometown when I pulled my car up to the backyard of a small, raggedy house. There was just enough light and I could make out the silhouettes of the men forcefully pulling a big buffalo into a shed behind the house. I followed the thin ream of light my flashlight provided and swiftly made it to the scene. I was tense, nervous, and filled with a sense of unreasonable guilt. My insides were twisting and turning as the animal was crying in pain. My camera was my witness…

The slaughter came to a halt, only to be resumed next weekend with another buffalo.