Warning: count(): Parameter must be an array or an object that implements Countable in /home/customer/www/moholyground.com/public_html/wp-content/themes/wpex-luxmag/functions/meta/init.php on line 755
 Todd Sanchioni: New Developments | Moholy Ground (MOH) 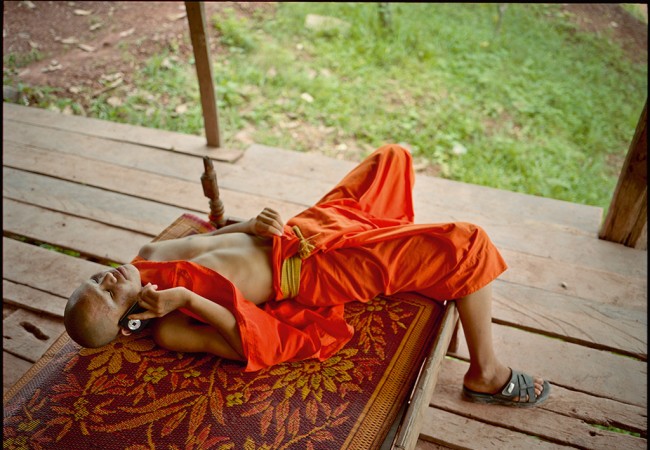 In the late summer of 2010, I returned to Laos to follow up on a project I was working on in 2007 recording and photographing musicians. I was startled at the change that occurred since my prior visit to this small country sandwiched between Thailand, Vietnam, and China. In the capitol city of Vientiane, the new development was fast and furious. In 2007 there was one ATM machine in the city, and now they were practically on every corner. Now billboards flooded the scenery, youth on motor scooters talked on mobile phones, and there was construction at every turn. I noticed these trends back in 2007, but they had metastasized at a staggering rate.

Although I had put a lot of energy into my search for musicians (which I shot in black & white and called “The Changing Face of Laos Through its Music”), it became non-inspiring. After a time, the project evolved into the challenge to take a good idea and give it life, rather than an inspired work of photography. I wanted an inspired work of photography! (Or at least to attempt to make one.) I was going to be in Laos for two months but, due to the language barrier, I wasn’t making any inroads into the culture. I had many leads to musicians that resulted in dead ends.

“With the thawing of the Cold War and the end of subsidies from the Soviet Union, ideology was no longer as important as deals and concessions for much desired natural resources.”

What I did understand was the culture of consumerism, and I have a knowledge of history. I decided to continue the musician project on the side while I set my main focus on the “New Developments” I was so taken by. It may seem subtle in the photos, but — in the context of the recent tragic history of Laos — it appeared drastic to me. Laos has often been called the “land in between;” during the American war against Vietnam, Laos was literally in between the bombing runs that the U.S. launched from bases in Thailand. The U.S. was secretly dropping bombs in Laos near the border of Vietnam to stop the supply route of the Vietcong, the Ho-Chi Minh trail. The bombing was relentless; from 1964 to 1973, the United States dropped more than two million tons of bombs on Laos. Laos has the unfortunate distinction of being the most heavily bombed country in the history of the world.

In 1975, communist Pathet Lao took over the government and the opposition was either imprisoned in “reeducation camps” or they fled over the Mekong River into camps in Thailand from which some found asylum in countries like France and the U.S. The Laotian government in those years considered the influence of Western cultural decadent and worthy of severe punishment if practiced. With the thawing of the Cold War and the end of subsidies from the Soviet Union, ideology was no longer as important as deals and concessions for much desired natural resources.

The past two decades have brought snowballing economic and social change to Laos. At the moment, subsistence agriculture accounts for 80% of its employment and less than one-third of the population lives in cities. Yet Laos’s rates of growth and urbanization are very high. Large-scale projects like dam construction and a growing tourism industry are bringing money into the country as never before.

The changes are cultural, too. Consumerism has arrived. Much like dealing with a natural disaster, Laos has to rebuild… but how will it do so and in what direction will it take? Coming from the U.S. and being saturated in consumerism, I found this “progress” out of place in such a unique and exotic place. Though development is desperately needed in Laos and the people benefit greatly from a rising standard of living, culture and native skills will undoubtedly be lost by the steamroller of Western cultural. It is hard not to wonder, is it worth it?

Todd Sanchioni was born in Miami, Florida in 1972 and was raised in Holliston, Massachusetts. He received his BFA at Tufts University/Museum School in 1996, and did post-graduate work at California College of Art in 2003. He has traveled extensively in South East Asia and has been working on a series about development in Laos. He lives, works, and sorts through a glut of photographs in San Francisco’s Mission District.