Warning: count(): Parameter must be an array or an object that implements Countable in /home/customer/www/moholyground.com/public_html/wp-content/themes/wpex-luxmag/functions/meta/init.php on line 755
 IAN MARTIN: Invisible People | Moholy Ground (MOH) 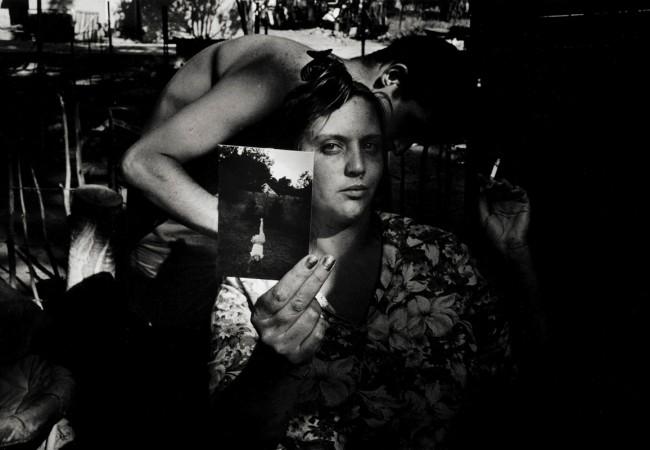 Photojournalist Ian Martin, a recipient of the Getty Images Grant for Editorial Photography, has contributed to Moholy Ground his photo-documentary of white poverty in South Africa. His accompanying essay describes the general conditions, as well as individual’s stories.

Ian Martin: Hidden Minority: South Africa’s White Poor-|Getty Images|- Residents of the  Sonskynhoekie (Sunshine) Care Centre, a non-profit shelter in the countryside north of Pretoria, sit on a bench outside the camp at dusk. From left to right, they are Fela Cook, 33, Magiel De Bryn, 13, and Johanna Mitchell, 37.

PART I: POOR AND WHITE
IN THE NEW SOUTH AFRICA

When I first heard the term white poverty” in South Africa, I thought it was an oxymoron. The only whites I had seen were affluent; they had nice cars, homes, and a lifestyle enhanced by labor made cheap by their country’s huge black poverty. In contrast, shanty towns ringed every city I visited. I didn’t see any white people living there. While most white South Africans enjoy a standard of living far higher than most non-whites, I was surprised to learn that there are exceptions. And, I discovered that few people outside of South Africa were aware of the existence of white people living in deep poverty there.

Ian Martin: Hidden Minority: South Africa’s White Poor-|Getty Images|- Hendrik “Whitey” Jacobus, 58, is a resident of an abandoned hospital in Vereeniging, South Africa. Here, he stands in the doorway of a room talking with another resident.

Perhaps they number around a half-million, but it’s hard to come by reliable statistics measuring white South African poverty. It is obvious, however, that poor whites are a minority of a minority in a country still struggling with the legacy of apartheid. Some are unable to find sympathy for a small group of people who benefited from the subjugation of white-supremacist rule. But, the suffering of poor whites is real and my subjects are not to blame for this injustice; many were children when apartheid ended and are often caught in a cycle of poverty stretching back more than 100 years to the Boer Wars.

By taking pictures of South African poor whites, I hope to disrupt the easy compartmentalization people often bring to their understanding of the world: that poverty looks a particular way, and that it affects particular groups of people. We tend to generalize about the world around us so that we can efficiently move through it. But we risk letting these generalizations calcify into stereotypes if we never challenge them. These stereotypes prevent us from recognizing the humanity in each other. They cost us our compassion. I hope my photographs cajole viewers into taking a new look at poverty and see clearly the people it affects, to see again outside the filter of their engrained expectations.

Ian Martin: Hidden Minority: South Africa’s White Poor-|Getty Images|- At the Sonskynhoekie (Sunshine) Care Centre, a non-profit shelter in the countryside north of Pretoria, Nataja Liadeque, 31, gets her hair cut by another resident Hendrik Coetsee, 29. She holds a photograph of one of her three daughters. Two were taken away by the state and the other was adopted by her father. “Mood swings” is how she describes the state of mind that inspired her to chase her former employer with a butcher knife at a kitchenware store.

Scott and Shana have a young daughter, Monica. The three live in a shanty improvised out of cargo pallets, plastic tarps, and construction netting in the Cape Flats area of Cape Town on a vacant lot they call “die veld,” which is Afrikaans for “the field.” Scott and Shana-not their real names-have a ferocious addiction to crystal methamphetamine. They call it, “tik.” Their addiction, more than anything, keeps them in poverty. They swing through extreme moods, go without sleep for days at a time, plunge into depression, and explode into violence. Scott and Shana have loud fights. He beats her. Shana strives to be a patient and loving mother to her daughter, but her efforts fall short: her waking hours are dedicated to the next hit of tike.

One afternoon, I’m inside their shanty with the three of them. Shana tries to convince Monica to wait outside before she and Scott smoke meth. Monica refuses and lies on a bed, curled up in a ball, separated from her parents by a makeshift curtain. Shana worries about the effects of the tik smoke on the child, but not enough to resist taking a hit. From outside comes a loud voice, a neighbor’s: “The police are here!” There is much scrambling in the dim shanty as drug paraphernalia is hidden. I slip out the shanty’s rear and circle back to the front in time to see two police officers and a woman with a sheaf of papers in her arms. Shana is nose-to-nose with the officers, screaming. The police take it calmly. The woman with the paperwork is a social worker, here to take Monica away. She’ll be entrusted to Shana’s sister.

By taking pictures of South African poor whites, I hope to disrupt the easy compartmentalization people often bring to their understanding of the world.”

I know it’s the right thing to do. Just the same, I feel awful about what I’m seeing. I’m a father of a little girl not a lot younger than Monica. Shana, in a panic, begs the police and the social worker not to take her child, until the calmer Scott settles her down. Then, the fight obviously lost, Shana tries to reassure the terrified Monica that she’s just going to live with her aunt for a while, that she’ll enjoy it. Monica doesn’t wantto hear it. She wants to stay with her mother. Scott then coaxes Monica to go with him in the social worker’s car. He asks me to follow them in my own car, which I do. I’m not sure why he wants me along-perhaps so that he’ll have a ride back or because he knows I’m sympathetic. I park a good ways off to watch Scott turn over Monica to her aunt. I photograph none of this.

Ian Martin: Hidden Minority: South Africa’s White Poor-|Getty Images|- Poverty and the harsh sun take their toll on the huts and sheds that make up the Sonskynhoekie Care Centre north of Pretoria.

Shana gradually comes to appreciate that Monica, her third child and the third to be taken away, is better off for the change. She won’t leave Scott; the memories of their early days together are good ones and she hopes that someday better times will return. Her self-esteem is badly damaged. In an interview, she told me that a close family member molested her twice when she was a girl. Her mother told her to forget about it, but she can’t. She says it stays in her mind all the time. At the end of her interview, I asked her if there’s anything else she would like to say about her life. She laughs. “There isn’t anything to say. Life is fucked. That’s all there is to say. Maybe one day I’ll be somewhere in life so we’ll just hope and pray for that. Maybe life will be better one day.”

Ian Martin is a documentary photojournalist who predominantly works in black and white. He is a 2008 recipient of a Getty Images Grant for Editorial Photography and his work has appeared in a myriad of publications including Newsweek, The New Yorker and Rolling Stone. He is also a former staff photographer for The Virginian-Pilot, Virginia’s largest newspaper.

Ian received the Getty Images grant to continue his project “Invisible People: Poor and White in the New South Africa,” a documentary he began in 2007. With the Getty Images funding, he spent over three months photographing in South Africa in the fall of 2008 and beginning of 2009.

Photographing for Newsweek in February and March of 2009, Ian spent two and a half weeks in Arizona and North Carolina covering law enforcement efforts to contain violence spawned by Mexican drug trafficking organizations. In May of 2008, Newsweek sent him to Texas and El Salvador to photograph the repatriation of 120 Salvadorans who were deported by the Immigration and Customs Enforcement agency.

From the beginning of 1997 through the middle of 2000, Ian worked for The Virginian-Pilot in Norfolk, Virginia. His assignments for The Pilot were broad in scope covering three hurricanes, general news, sports and fashion, as well as several in-depth documentary photography projects.

In 2000, Ian left The Pilot to return home to Northern California. In 2001, he launched Ian Martin Wedding Photojournalism, a business that allows him to pursue his documentary photography without compromise.